Disclaimer: None of our reviews are sponsored. We earn a commission when you purchase items through our links.

Using a corded impact wrench frees you from having to use an air compressor.

However, it’s not always easy to choose the right model with so many available on the market.

So we’ve put together this short list of some of the best and most powerful models available as well as a buying guide at the end.

Here's 3 products we picked out that thought you would be interested in depending on your budget...

Best Pick
Makita 9 Amp 3/4-Inch Impact Wrench
For professionals looking for a heavy-duty impact wrench, this will be the perfect choice for you. It features an incredible level of torque with a powerful motor. It is a high quality very easy to use wrench.
Best Value
DEWALT 7.5-Amp 1/2-Inch Impact Wrench
Dewalt have made this impact wrench which is perfect for vehicles and machinery. It has their usual level of quality with a great level of durability, and an impressive amount torque and RPM.
Best Budget
Porter-Cable 7.5 Amp 1/2" Impact Wrench
For a compact and budget option, this impact wrench has a very high level of torque. It’s great for multiple different applications with its great usability and high build quality.

Here's a list of the best corded impact wrenches we found: 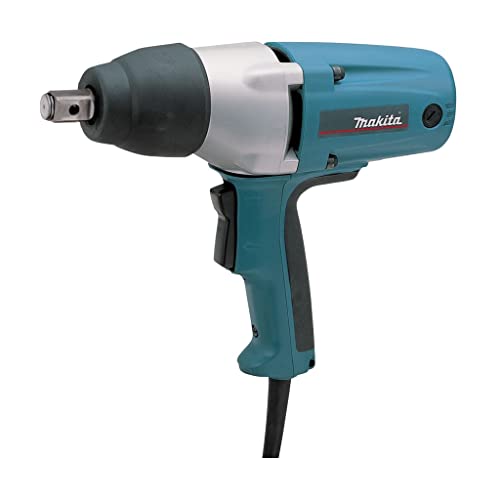 At 3/4 inch this is a wrench for those heavy-duty applications and it does the job superbly. It has a high level of power and it’s able to deliver that power in a smooth and efficient way. It makes for a tool that is very easy to use, despite its large size.

The side handle it has it able to rotate 360° which may be great for some whereas others see it as more of a hindrance. It has a good level of speed while providing enough impacts to makes sure any job is done easily and quickly. 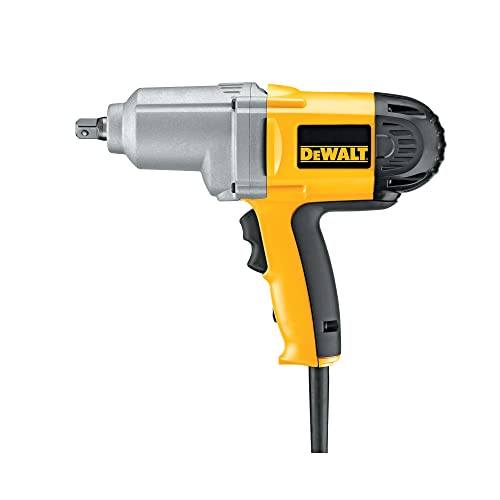 Dewalt are known for making high-quality tools and this is another great product from them. One of its most endearing qualities is the durability it has as this impact wrench will last for many years. The overall quality is great and you won’t be disappointed.

What you might be disappointed in is the torque. At 345 ft-lbs it is still high but a bit below other models but it can still be used for a wide range of applications. It is very easy to use and comfortable hold, making it perfect for everyday jobs. 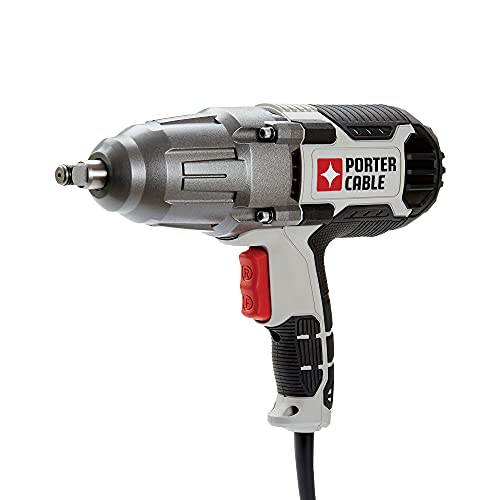 For the price, this is a great impact wrench. It has a high level of torque which is going to be brilliant for almost all jobs. Some users have reported a lack of power but most are extremely happy with the way that it can take off even the most stubborn of bolts.

As well as the torque, the impact wrench also has great RPM and IPM to complete an impressive trio of key figures. It’s another impact wrench that is very easy to hold and you will be able to work for a long time with this wrench without getting tired. 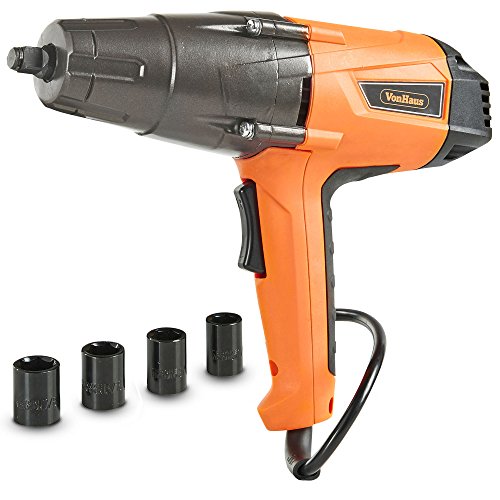 Despite advertising this product as compact and lightweight it’s actually heavier than other similar models. That’s only by a few pounds, with the rest of its features really standing out. That weight is counteracted by the smooth action it has with minimal vibrations.

It may only have 260 ft-lbs of torque but it is able to deliver it very well with the powerful motor it has. It’s a highly rated product and it’s easy to see why. It’s very easy to use and has a high level of build quality. 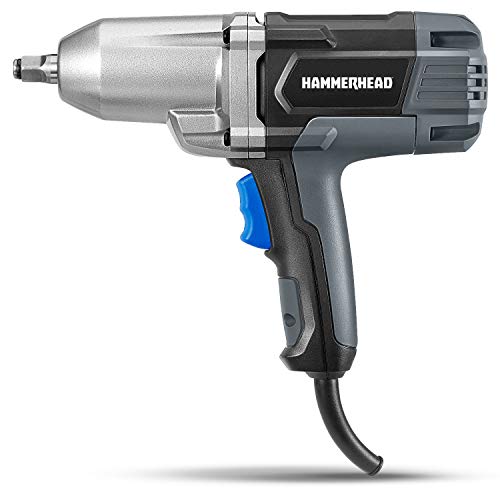 It’s highly durable which is helped by the metal gearbox that it has. All the switches are conveniently placed with perhaps the only aspect letting this wrench down being its weight. Arm fatigue can set in quickly but aside from that it’s a quality corded impact wrench.

The speed of most rotating tools will more often than not be measured in revolutions per minute (RPM). This is an accurate representation for the speed but for some tools it’s not actually that important. With an impact wrench, it’s one of those instances where it’s not crucial.

That being said, it can still play an important role in the usefulness of the tool but it simply has to be taken into consideration with two other important measurements, which are the number of impacts and the torque. Without all three, you’re not going to have a very powerful tool.

Most 1/2 inch wrenches will have an RPM of 2,000+ which will allow for a very quick twisting of the bolt. Larger impact wrenches will be slightly down on this figure but that it because they need a higher level of torque. With these tools, an RPM of 1,500+ would be perfect.

Just because something has speed, it doesn’t mean that it has torque. A Ferrari towing a caravan, for example, is going to lose in a race to a large pick-up truck with the same load. In order to loosen or tighten a bolt, a large twisting force is required, and that is torque.

You can see here why toque would be more important than speed. Without a high level of torque, you’re not going to be able to tighten or loosen anything to a sufficient standard. Your tool wouldn’t be able to use its speed as it doesn’t have the torque to twist the bolt.

This is the number one priority when it comes to wrenches. Torque is measured in foot-pounds of pressure. For everyday tasks, 200+ would be more than enough. For more industrial applications with larger tools, foot poundage of over 350 would be required.

You’ll see the number of impacts under a couple of different acronyms as it is often referred to as IPM or BPM. It is the impacts or blows, per minute. As you tighten the fastener will obviously keep moving down the thread and the impact wrench needs to move with it.

The number of impacts relates to the number of times a minute that the tool drives the socket forward. Without this, the user would have to use their own strength to apply the pressure. This is why it’s called an impact wrench as both rotation and forward force is applied.

The larger tools tend to have less IPM as higher torque is required but a figure of over 1,500 should be enough. For regular impact wrenches, over 2,500 would be a great BPM and would easily drive in anything you needed.

Even the lightest models can be quite heavy though with the power and reliability they require. This is where proper technique needs to be exercised. Holding it as closely and safely close to your body will lower fatigue, as will using two hands.

Weight plays a key role in the usability of an impact wrench but there are other key areas to consider. The placement of the trigger and rocker switches needs to be simple and the grip needs to be comfortable as well.

The balance of weight is also important as a tool which is front or back loaded will be hard to use. Another key aspect is how easy the sockets will be removed, and we go into that into more detail below and explore the difference between hog rings and detent pins.

Getting the right size

There are three common sizes when it comes to impact wrenches with 3/8 inch, 1/2 inch and 3/4 being the most used options. As you can imagine, the bigger the size, the bigger the sockets they are intended to hold onto.

With the right socket set, this isn’t going to be a huge issue but the larger models generally carry a higher level of torque and are designed for bigger jobs. For most motoring and common needs, 1/2 would be fine but for heavy-duty tasks, 3/4 inch would be most appropriate.

It’s important to know the difference between a hog ring or detent pin anvil as this is in reference to how the socket is held into place. A hog ring is where there will be a circular ring at the end to hold the socket while a detent pin has a spring-loaded bearing to keep it in place.

A detent pin will hold the socket in more securely. While that may seem like a good thing, most users prefer a hog ring anvil. The reason for that is that they are much easier to change and are still able to hold the socket on.

With a detent pin, you usually can’t pull the socket straight off. Instead, you have to use a punch to be able to compress the bearing and remove the pocket. This security is good for heavy-duty use and it’s a personal preference, with most enjoying the ease of use with a hog ring anvil.

Benefits of a corded impact wrench over cordless & air models

As with a lot of tools, there is often a hard choice to make with how they are powered. Firstly, cordless vs corded is a very simple comparison. Cordless is great as the tool will be more maneuverable and you won’t be restricted by the length of the cord.

The disadvantages are clear though as you are dependent on battery power for a high powered tool and might need to spend a long time waiting for it to charge. That’s why many prefer corded as the hassle of dealing with a battery is much greater than having a cord.

In terms of overall performance, an air powered wrench would be the best forward. That’s because the huge pressure of compressed air will pneumatically power your tool. This sounds great in theory but you will also need a very expensive and heavy air compressor. That’s why air tools are usually used in stationary businesses, such as a garage.

The reason that anyone buys a cordless impact wrench is that manually using a wrench can be extremely exhausting. Not only that but it can often be impossible for a human to have the torque required. If you’re going to get an impact wrench to solve the problem, it may as well be the best one on the market.

That’s where the Makita 9 Amp 3/4-inch impact wrench comes is as it will transform a torturous job into an extremely easy one. It does so with a great level of torque and tool that is easy to hold and is able to provide smooth power.